Position paper: Does radiotherapy play a role in activated osteoarthritis of the temporomandibular joint?

Topic: Could radiotherapy be a treatment option for symptomatic inflammatory and/or degenerative arthropathy of the temporomandibular joint?

Among the degenerative and degenerative-inflammatory diseases, plantar fasciitis (with or without accompanying heel spur), enthesiopathy, tendinitis, epicondylitis, and subacromial syndrome play an important role [17, 24, 25]. In a large percentage, many of these diseases can be cured or at least significantly improved by means of radiotherapy. For example, in plantar fasciitis, radiotherapy is a standard therapy. The effect has been demonstrated in numerous prospective, randomized studies [18, 24].

The current S2k-Guideline of the DEGRO (German Society for Radiation Oncology) provides a “should” recommendation for gonarthritis and a “can” recommendation for other arthritides. Thus, according to the guideline’s recommendations, there is also the possibility to employ irradiation in the treatment of osteo­arthritis or degenerative and/or inflammatory ar­thropathies of the TMJ [16, 17, 20]. The author’s research group has been successfully treating patients with TMJ osteoarthritis using radiotherapy for several years. Most of these patients are included in a national multicenter observational study.

Many preclinical studies have shown that low-dose radiotherapy has an inflammation-modulating or anti-inflammatory effect via different mechanisms. For example, a reduction of chemotactic cytokines (e.g., CCL20) has been shown. Thus, fewer inflammatory cells are attracted [17, 22].

One of the most important stages in the inflammatory cascade is the adhesion of monocytes and granulocytes to the endothelium and the migration of these immune cells into the inflamed tissue. One mode of action of low-dose radiotherapy is to attenuate this adhesion process. Interestingly, this effect is independent of the target irradiated (that is, whether the immune cells or the endothelial cells are irradiated) [17, 21, 24].

The release of anti-adhesive cytokines also seems to be a starting point for the immunomodulatory or anti-inflammatory effect of low-dose radiotherapy [17]. Apoptosis of inflammatory cells (especially granulocytes and monocytes) likewise appears to play a role [6].

Another important target that is related to the analgesic and anti-inflammatory effects of low-dose radiotherapy is the attenuation of nitric oxide synthase and thus nitric oxide production. Nitric oxides are an important carrier of the inflammatory response and are strongly involved in inflammatory pain [17, 21].

What is common to these anti-inflammatory mechanisms is that their maximum effect is in the range of low-dose radiotherapy (doses between 0.3 and 1.0 Gy). At higher radiation doses, there does not seem to be an increased anti-inflammatory effect, but rather, a weaker effect can be assumed [5, 21].

These mechanisms have now been relatively well-studied at the molecular level or in cell experiments. The effect has also been demonstrated in animal models. Moreover, there are also clinical studies demonstrating that these models are applicable to patients and that low-dose radiotherapy has immunomodulatory or anti-inflammatory effects in various disease conditions [3, 5, 7, 8, 27].

What radiotherapy of various degenerative and degenerative-inflammatory diseases has in common is that low radiation doses are used, usually individual doses between 0.5 and 1.0 Gy. Total doses of 3.0–6.0 Gy are usually applied. In most cases, irradiation is not performed daily, but 2–3 times a week [20, 21].

In contrast, in curative cases of malignant tumors, radiation doses of around 50 Gy are generally used in multimodal therapy approaches, and over 60 Gy in definitive radiotherapy.

Irradiation of non-malignant diseases can be performed with a linear accelerator (using photon or electron radiation) or, in part, with an orthovoltage device. A linear accelerator should be used for irradiation of activated TMJ osteoarthritis. As part of the planning, 3D CT planning should be integrated – ideally MRI-guided – in order to protect surrounding tissue and organs at risk [2,21].

Current evidence on radiotherapy for osteoarthritis

Since the 1920s, there have been a large number of publications showing the benefit of radiotherapy in patients with osteoarthritis. As of 2019, the author’s research group has identified a total of 50 publications with over 12,000 patients who have been evaluated [11, 15]. In recent years, however, there have been 2 random­ized studies on knee osteoarthritis and finger polyarthrosis, each with a smaller number of patients, that failed to show a significant benefit [13, 14]. This is in contrast to the many other studies that point to a benefit for patients – all the more so because there are also several studies that have used objectifiable criteria to demonstrate responsiveness [8, 19]. In this regard, one assumption as to why these two randomized trials failed to show a significant benefit is that they probably included many patients with very advanced osteoarthritis. It is likely that several different pain components play a role in osteoarthritis. In addition to pain that is purely degenerative, there is also an important inflammatory pain component in activated osteoarthritis, respectively inflammatory or degenerative-inflammatory arthro­pa­thy. It can be assumed that radiotherapy can help improve the inflammatory pain component, in particular, but its effect on the purely degenerative pain component is insufficient [8, 19, 21, 27].

Many studies have shown that the analgesic, respectively the anti-inflammatory, effect occurs with a certain latency [11, 18, 28], usually ranging between 2 and 6 weeks after the end of radiotherapy. Only a small proportion of patients experience an improvement in pain during or immediately after radiotherapy. The pain minimum is usually reached between 4 and 6 weeks after the end of radiotherapy. The evaluation of the success is therefore only possible with a time delay. The first clinical follow-up examination should generally take place 10–12 weeks after the end of radiotherapy. In case of an insufficient effect or lack of response, a new course of irradiation can be performed. Clinical studies have shown the benefit of such re-irradiation in degenerative or degenerative-inflammatory diseases, even in patients who did not show a response in the first course [9, 10].

Unlike enthesopathies (tendon attachment diseases) or tendinitides (tendon inflammations), in osteoarthritis, the analgesic effect of radiotherapy is often not permanent, but only present for a few years. This is most likely explained by the degenerative pain component of osteoarthritis. In addition, osteoarthritis constitutes a progressive clinical pattern with further progressive degeneration [11, 16, 18, 20].

Since recent data suggests that predominantly or exclusively the inflammatory pain component can be favorably influenced by low-dose radiotherapy, patients with activated osteoarthritis – ideally patients in the activated relapse of osteoarthritis – should be treated particularly [19].

Whether analgesic or anti-inflammatory radiotherapy can slow down progression has not yet been clearly proven. There are – predominantly preclinical – studies that may suggests this [3, 5, 27].

Since low-dose radiotherapy is used for treatment – as mentioned above – so-called deterministic toxicities are not to be expected. These include typical side effects such as radiodermatitis or mucositis. The typical late side effects of higher-dose radiotherapy such as fibrosis or xerostomia are also not to be expected, or can be virtually ruled out, as the tolerance doses of the organs at risk are generally not reached or by far not reached [17, 21, 23].

In principle, there is a risk of stochastic side effects (e.g. tumor induction) with each application of radiation on humans. This risk of tumor induction is low in the case of radiotherapy for degenerative and degenerative-inflammatory diseases. The effective dose model can be used to estimate this risk. However, individual factors such as gender and age of the patient must still be accounted for in the assessment. The potential chance of improvement and the risks of alternative therapy options must be weighed against this risk [2, 21, 26].

In a calculation according to ICRP 2008, for an intermediate-aged patient who is irradiated unilaterally at the TMJ with a dose of 6 × 0.5 Gray, there is an estimated lifetime risk of approximately 0.008 % for the induction of a malignant tumor [2, 26].

Patients with activated osteoarthritis of the TMJ may also be referred for radiotherapy by dentists [12]. It should be noted that a referral is required for radiotherapy appointments. It is also advisable to send the most important documents and information in advance (provided the patient agrees to this after being informed in accordance with data protection regulations). In particular, the previous course of the disease, the course of treatment, and available cross-sectional imaging (e.g. CT or MRI) with corresponding radiological findings are very relevant.

Low-dose radiotherapy for treating osteoarthritis of the TMJ is a conservative treatment option. In particular, it can be applied in cases of activated osteoarthritis as well as inflammatory or degenerative-inflammatory arthropathies. Even if patients having TMJ osteoarthritis are underrepresented in the studies to date, treatment can be provided in analogy to osteoarthritis at other sites, with the aim of achieving analgesic and anti-inflammatory effects. This is also in line with the recommendation of the S2k-Guideline of the DEGRO.

The treatment utilizes low doses of irradiation. Typical deterministic toxicities are not expected and the risk of stochastic side effects appears to be low.

The author declares that there is no conflict of interest as defined by the guidelines of the International Committee of Medical Journal Editors. 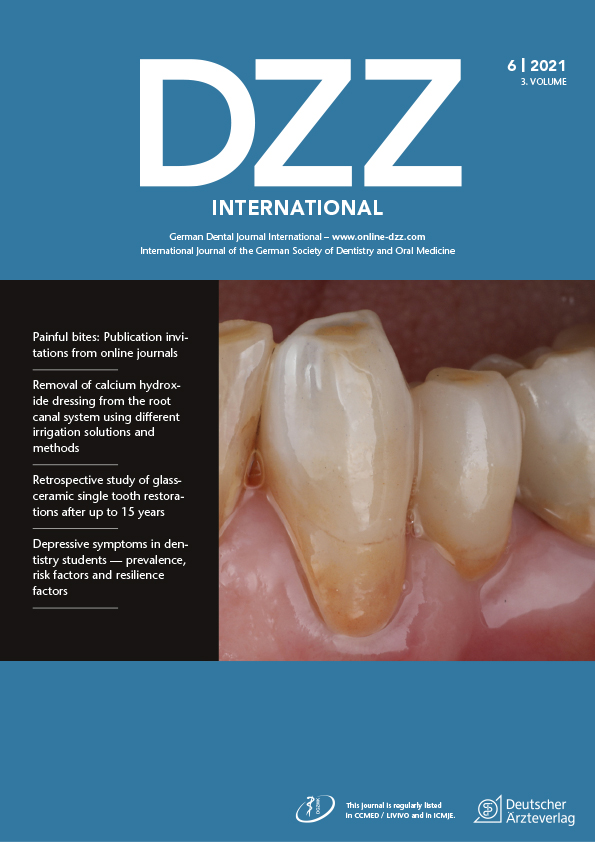