At the beginning of summer 2020, the names and rankings of the scientific journals with a Journal Impact Factor (JIF) for the year 2019 were released (InCites Journal Citation Reports, Clarivate Analytics). Presently, 12,827 journals have a JIF value. In the following, as regularly since 2015 [22–26], the current JIFs from den­tistry are presented and compared to the scientific journals with the highest JIF. Furthermore, the Median Impact Factor (MIF) of the category Dentistry, Oral Surgery & Medicine is compared with that of other disciplines.

In the calculation year 2019, 91 dental journals can adorn themselves with a JIF (Table 1). The International Journal of Implant Dentistry (rank 32) was included for the first time. The French Révue de Stomatologie, de Chirurgie Maxillo-Faciale et de Chirurgie Orale is now only represented under its English title Journal of Stomatology, Oral and Maxillofacial Surgery.

The JIF values for 2019 cover a range from 0.111 (Australasian Orthodontic Journal) to 7.718 (Periodontology 2000). For a frame of reference, table 2 lists the 20 scientific journals with the highest JIF. It should be noted that only about 2 % of all scientific journals have a JIF of 10 or higher [10].

Compared to the previous year, 41 journals have deteriorated in their ranking. Nevertheless, 57 of the 90 journal titles that allow a comparison show a higher JIF than in 2018.

The five periodicals with the strongest JIF or JIF rank changes up (improvement) and down (deterioration) are listed in tables 3 and 4. “Winners of the 2019 JIF year” are mainly the Journal of Evidence-Based Dental Practice and the European Journal of Paediatric Dentistry. “Losers of the year” are the European Journal of Dental Education, the Australian Endodontic Journal, and Pediatric Dentistry.

The renaming of the Révue de Stomatologie, de Chirurgie Maxillo- Faciale et de Chirurgie Orale, founded in 1874 and steeped in tradition, into Journal of Stomatology, Oral and Maxillofacial Surgery in 2017 is an example of how a change of name and language may be accompanied by a noticeable increase in the JIF. While the JIF of the French-language journal fluctuated between 0.247 (2016) and 0.472 (2018), the JIF was already 0.962 in 2018 and 1.152 in 2019 after the language change (Table 5). The fact that the significantly higher JIF was accompanied by equally clear discontent in the French dental community is a different story.1

1 “La Revue de stomatologie de chirurgie maxillo-faciale et de chirurgie orale va passer, à partir du premier numéro de l’année 2017 (volume 118), à l’anglais exclusif.”. With this memorable sentence – announced quasi ex cathedra – the upcoming name change was heralded in November 2016 [13]. One can easily imagine that this met with little enthusiasm in the country of Molière and Voltaire, as can be seen from a remark published in the following issue of the journal: “If this evolution is upsetting to some of you, we are sincerely sorry to hear it.” [17], as well as from the confession that “[i]t was not easy, however, for our established base of authors, who were somewhat disconcerted to find that articles were no longer accepted when submitted in French, for our loyal readership that was unaccustomed to reading papers written exclusively in English, or for the editorial team that had to adapt to the foreign language that English was for most of them.” [17].

The Median Impact Factor (MIF) is the median value of all JIFs in a defined subject category. Dentistry increased its last year‘s MIF from 1.565 to 1.766, the highest value in its history. At the same time, dentistry jumped 15 places up from 2018.

Nevertheless, our discipline has to accept that it remains within the (upper) fourth fifth compared to the other 235 subject categories (Table 6). Place 145 means, however, that only four ranks up to the middle fifth are missing.

Incorrect application of the JIF

The fact that the JIF is not suitable for mapping the individual performance of an author was explained in detail in previous years [22–26]. Nonetheless, such erroneous attribution is still commonplace at many academic institutions.

This practice, however, reveals another cardinal error which relates to the attribution of the respective JIF value to a journal. It has become a common practice that immediately after the publication of an article in a journal, the respective authors (whose number is in part hardly comprehensibly high) are “credited” with the current JIF of that journal. As a rule, this numerical value is not corrected later, so that the value once assigned (which is wrong without exception, since it comes from a previous year) remains unchanged.

Example: Authors whose article was published between January and June 2019 will add the JIF of 2017 to their article; authors whose article was published between July and December 2018 will claim the then current JIF of 2018 for themselves (Fig. 1). Yet, in both cases these assignments should only be considered temporary. The correct value is not released before the middle of the following year when the figures for the previous year are published (i.e. in June 2020 the JIF values for 2019; Fig. 1). This results in a delay of 6 to18 months between the publication of the article and the release of the JIF for the publication year in question.

“The performance of a researcher should certainly not be measured by the number of articles, nor by the impact factor of the journal in which [the article] is published.”

Criticism on the JIF

Criticism of the JIF from the scientific community continued unabated in the year under review. Koelblinger et al. [11] argued that a journal with a large number of citable articles is a strong predictor of relatively stable, i.e. only slightly fluctuating, JIF values over time. Specifically for dental journals, Valderrama et al. [28] found that systematic reviews and a higher annual average of published papers had the potential to increase the JIF, while articles that publish clinical trial results had no effect on a JIF. Not unexpectedly, dental journals with a high JIF therefore tend to publish more systematic reviews (or meta-analyses: quantitative systematic reviews) [27]. Further comments on the JIF can be found in Table 7.

Neumann [19] and Brembs [5] summarize some arguments against the JIF that are worth thinking about:

Alternatives to the JIF

Those who believe that the JIF is “without alternative” fail to recognize that many other metrics are available. Forty-five alternatives were recently summarized by Mech et al. [16], including the following:

Mech et al. [16] prefer the I3 index because it does not have most of the disadvantages of JIF.

The author declares that there is no conflict of interest as defined by the guidelines of the International Committee of Medical Journal Editors. 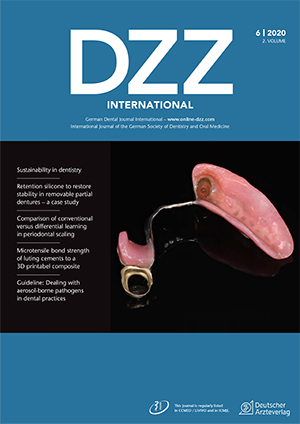