Are apical lesions visible more often in CBCT than in panoramic radiographs?

Introduction: This study compares the accuracy of panoramic radiography and CBCT in detecting and diagnosing mandibular apical lesions, analysing the effect of the thickness of the cortical bone on the radiological visibility of apical lesions.

Methods: Digital images of 343 patients who had CBCT scans and panoramic radiographs were inspected for mandibular apical lesions. The dimensions of the lesion and the thickness of the cortical bone in the affected region were measured. Statistical analyses were made using statistical software (IBM SPSS 25, IBM, Armonk, NY, USA).

Results: CBCT detected apical lesions around 115 teeth; 77 of these were also visible on a panoramic radiography. The differences between the two methods were statistically significant in the premolar and molar regions (McNemar test; p < 0.001) but not in the anterior region (p = 0.063). For the size of the lesions no significant differences were found (Wilcoxon test; anterior, p = 0.60; premolar, p = 0.90; molar, p = 0.61). In the Mann-Whitney U test, buccal and palatal cortical thickness did not significantly influence the visibility of lesions in CBCT and panoramic measurements (buccal, p = 0.93; palatal, p = 0.15).

Conclusion: Apical lesions seem to be much more readily visible on CBCT scans. The thickness of the cortical bone and the size of the lesions do not significantly influence the representation of apical lesions.

Apical bony lesions, usually detected as a radiolucency around the root on radiographs , are a common sequela of endodontic infections [2]. Selecting the appropriate therapeutic approach requires an accurate diagnosis [7]. The diagnosis, assessment and treatment of an endodontic condition is generally accomplished by periapical radiography [2, 8] or panoramic radiography [1]. The current gold standard for detection of periapical lesions is routinely periapical radiography [2, 8]. Practitioners often prefer digital imaging because it requires no time-consuming processing [18, 21, 24] and the results are more accurate. Digital imaging is more sensitive in detecting apical lesion than conventional periapical radiography [9, 10]. However, there have been frequent reports that bony aspects of apical bony lesions were not always detectable on periapical radiographs [31]. If these lesions involve cortical bone (buccal or lingual), this will typically result in reduced radiodensity in some areas, whereas lesions in cancellous bone enclosed by dense cortical bone will frequently remain undetected [7, 12, 14, 28].

The most important factor that determines whether apical bony lesions are visible on intraoral radiographs is the presence or absence of cortical perforation. Van Assche et al. found that approximately 90% of these lesions were detected if the cortex had been perforated, but the examiners detected only 10% of intrabony lesions [27]. A correct diagnosis is also made more difficult by variations in apical morphology, x-ray angulations, bone density and radiographic contrast [11].

Three-dimensional (3D) imaging is an alternative to two-dimensional (2D) panoramic and periapical radiography in detecting apical lesions. The 3D technology most frequently used is cone-beam computed tomography (CBCT). Recent studies have looked at the diagnostic value of CBCT scans in relation to apical lesions [2, 3, 14, 20, 26, 29]. Paula-Silva et al., comparing periapical radiographs with CBCT and histological findings, found that the apical lesions were not detected on periapical radiographs in 22% of cases, while CBCT only failed to detect them in 9% of cases [6]. This was confirmed by studies reporting significantly more accurate diagnoses for CBCT than had been the case for periapical radiographs [2, 7, 14]. It should be noted, however, that most of the studies were either ex vivo or animal studies [2, 6, 14], had small study populations [3, 26] or did not directly compare 2D images and 3D images for specific patients [7, 20, 29]. A systematic review with meta-analysis by Leonardi Dutra et al. yielded no data for comparing panoramic radiography and CBCT [17].

The aim of the present study, therefore, was to compare the visibility of mandibular apical lesions in 2D (panoramic radiography) and 3D (CBCT) radiographs of the same patient and determine whether cortical bone thickness influenced the detectability of apical lesions in a study population of adequate size. Furthermore, it was the authors’ intention to measure the size and number of the lesions.

Ethical approval was secured from the Medical Council of Baden-Württemberg, Germany (Register No. F-2014–006-z). The present study was conducted in accordance with the ethical standards of the 1964 Declaration of Helsinki [32]. Imaging records for over 1,000 patients (including panoramic radiography and CBCT) were selected from a data repository at a dental radiological centre. The original examinations had taken place between February of 2010 and January of 2017. Endodontic, periodontal and implant-related diagnoses were included, in addition to some miscellaneous indications (such as a search for cysts, impacted teeth or bone fractures). All patients that were included had had at least one panoramic radiograph and one CBCT scan taken within the previous three months. Patients with an interval between examinations of more than three months were excluded to avoid any distortion potentially caused by changes in the anatomy (such as the development of apical lesions). Data were anonymised prior to analysis.

Digital panoramic radiographs were obtained using an Orthophos D3297 (Sirona, Bensheim, Germany) with 60 kVp and a size of the focal spot of 0.5 mm. Panoramic radiographs were calibrated by reference to objects with a known length (such as implants, metal objects, root canal-treated restored teeth) to eliminate any errors that might have been caused by magnification. Cases without reference objects were excluded. CBCT scans were acquired with a Gendex GXCB-500 (KaVo, Hamburg, Germany) with an 8 × 8 cm field of view (FoV). The exposure was set at 120 kVp/5 mA and 6.0 seconds; the voxel size was set at 0.2 mm. All images were obtained by a dental radiologist. The panoramic images were evaluated with imaging software (DBSWIN v. 5.1.1, Dürr Dental, Bietigheim-Bissingen, Germany). CBCT images were examined using i-CAT Vision software (Imaging Sciences, Hatfield, PA, USA). One examiner with the necessary specialist CBCT competence visually analysed the digital images on a validated computer monitor (Eizo Flex Scan S2000, Eizo Corp., Hakusan, Ishikawa, Japan) in a darkroom after being specially trained by a dental radiologist.

After the training, inter-examiner and intra-examiner reliability values were calculated for 20 samples. The measurements proceeded for no more than 6 hours per day, with 30-minute periods of rest every 2 hours. All records were reviewed for errors and corrected by a dental radiologist if necessary. Only teeth visible on both the panoramic radiograph and CBCT were included.

The presence or absence of apical lesions was determined for each tooth (Fig 1), with lesion size measured in vertical (Fig. 2) and horizontal (Fig. 3) direction. For CBCT images, the buccopalatal extension of any lesions and the cortical bone thickness (buccally and palatally) in the area of the lesions, if appropriate, were measured.

Data were transferred to individual data acquisition forms for analysis by statistical software (SPSS 25) by a professional medical-statistics provider (medistat, Kronshagen, Germany). The frequency of apical lesions was recorded separately for anteriors/canines, premolars and molars.

The working hypothesis was: “There is no difference in the visibility of apical lesions on panoramic radiographs and CBCT scans.”

The CBCT and PR measurements were tested by the Wilcoxon Test for Pair Differences for variations. Two independent samples were compared by means of the Mann-Whitney U test. To examine correlations between quantitative, not normally distributed parameters, a rank correlation analysis was carried out as per Spearman.

The McNemar test and the chi-square test were used for a statistical testing of the working hypothesis (differences between imaging techniques regarding the visibility of periapical lesions). A p-value of ≤ 0.05 indicates the presence of a significant difference.

A total of 343 patients for which mandibular panoramic radiographs and CBCT scans – taken within 3 months – were available were included in the study. Genders were represented approximately equally (174 female/169 male). The patients’ age at baseline was 59.0 ± 14.5 (mean ± SD; range 19–92) years. The indications for CBCT scans are shown in Table 1; in some cases, there were multiple indications. The inter-examiner and intra-examiner reliabilities were rated as very high (Cohen’s kappa 1.0; 95% CI for kappa [0.92; 1.00]).

The prevalence of apical lesions as identified by panoramic radiographs and CBCT is presented as a cross-classified table (Table 2). 67.0% of the lesions visible by CBCT were also visible on a panoramic radiography. The visibility differences were significant in the premolar and molar regions (McNemar test; p < 0.001) but not in the anterior region (p = 0.063).

The cortical bone was significantly thicker both on the buccal and on the palatal aspect (Mann-Whitney U test; p < 0.01) for molars on which apical lesions were visible on both CBCT and panoramic radiographs. The visibility of the apical lesions showed no correlation with bone thickness in the anterior (buccal p = 0.65; palatal p = 0.59) and premolar regions (buccal p = 0.68; palatal p = 0.11).

This result agrees with a study by Nardi et al., who investigated the accuracy of panoramic radiography in detecting apical lesions on asymptomatic root canal-treated teeth and found higher positive predictive values for lesions located in the mandible in canine/premolar and molar areas [19]. Furthermore, Nardi et al. found negative predictive values for panoramic radiography if the lesions were smaller than 4.6 mm and did not affect the cortical bone [19]. In the present study, discrepancies were highly evident. A possible explanation in the anterior region is that the anterior imaging quality is often poor in the latter due to a possible superimposition of the spine or blurring caused by a position out of focus. Hence, this value is significantly higher than the visibility of anterior maxillary lesions, of which only 13.6% were detected via panoramic radiography. This discrepancy is caused by the roots in the mandible being more orthograde to the x-ray beam. Furthermore, disturbances by superimposition of anatomical structures are less common in the mandible [19]. Not once was a lesion found on a panoramic radiograph if not on the corresponding CBCT. However, not least because of radiation protection requirements in accordance with the ALARA/ALADA principle [13] (“As low as reasonably achievable/as low as diagnostically acceptable”), panoramic radiography is not the diagnostic method of choice for apical lesions [19].

The present study is of limited validity because histological material could not be acquired for ethical reasons. False-negative/false-positive results may have been present. However, histopathologic studies reached comparable results and showed high diagnostic accuracy for CBCT and apical lesions compared with panoramic radiography [2]. Other human clinical studies used CBCT as reference, [4, 5, 7, 22, 23 ] with possibly biased results [25, 30]. Recently, Kruse et al. found that the diagnostic accuracy of CBCT depends on the endodontic status of the tooth. The diagnostic accuracy of CBCT was high for non-treated roots, whereas the diagnosis of apical lesions on root canal-treated roots was less accurate [16]. This aspect had not been known when the present study was implemented and was therefore not considered.

For this study the researcher was briefed by an expert in the field of dental radiology prior to commencement of the study. To verify the reliability of radiographic measurements and evaluations, multiple ratings were carried out of 20 randomly selected patients. Since a selected patient population was included here, a possible risk of spectrum bias cannot be ruled out. However, the high intra- and interrater reliability (Cohen’s kappa 1.0) of the study also indicates the reliability of the results.

A systematic review and meta-analysis by Leonardi Dutra et al., on the other hand, found high levels of accuracy for CBCT (0.96) compared to the already good results obtained by periapical radiography (0.72–0.73) in detecting apical lesions. The present results combined with current published research allow us to conclude that CBCT is more accurate in detecting apical lesions than panoramic radiography [17].

There was no correlation between cortical bone perforation and lesion visibility in the mandible, contradicting previous results [27].

Availability of data and materials

The datasets used and/or analyzed during the current study are available from the corresponding author on reasonable request. 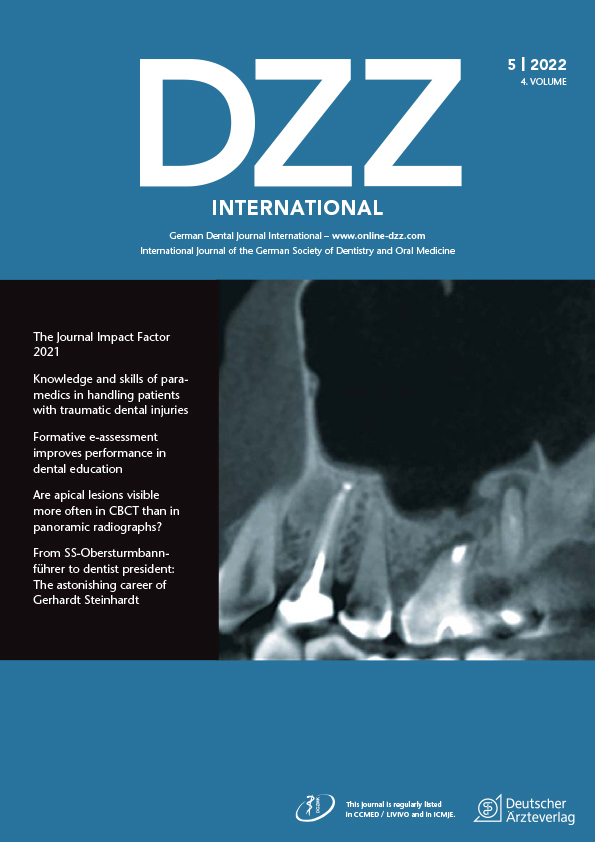