Introduction: The Marfan syndrome is a rare connective tissue disorder with autosomal dominant inheritance. The aim of the present study was to evaluate the caries experience in children and adolescents with Marfan syndrome.

Conclusion: In the present study, children and adolescents with Marfan syndrome did not show a higher caries experience compared to a systemically healthy control group.

Marfan syndrome is a rare connective tissue disease with autosomal dominant inheritance [23]. The incidence of classic Marfan syndrome is reported in literature to be 2–3 per 10,000 inhabitants, regardless of gender or ethnicity [18]. Persons with Marfan syndrome usually have a large, lean stature, long extremities, arachnodactyly (Fig. 1), joint hy­permobility, and deformities of the thorax and spine (e.g., scoliosis) [7]. More than 1000 different mutations in the fibrillin-1 (FBN1) gene on chromosome 15 have been identified as the cause of classical Marfan syndrome [26]. Since the clinical picture of Marfan syndrome is variable and the genetic causes are heterogeneous, it is difficult to distinguish it from other diseases of the connective tissue (e.g., Loeys-Dietz syndrome, Ehlers-Danlos syndrome, Shprintzen-Goldberg syndrome, Weill-Marche­sani syndrome) [1]. For the diagnosis of Marfan syndrome, the use of the revised version of Ghent-nosology has proven to be of value. In addition to the detection of an FBN1 mutation and a family history, the manifestations of an aortic aneurysm and an ectopia lentis are taken into account [9, 22]. Cardiovascular complications such as aortic dilatation, dissection and rupture were the main reason why patients with Marfan syndrome had a reduced life expectancy compared to the normal population [24]. Although there is still no causal therapy available for Marfan syndrome, drug therapy and, in advanced cases, cardiovascular surgery have significantly increased life expectancy [19, 29].

Characteristic orofacial manifestations such as retrognathia, dolichocephaly, Gothic palate, cranio­mandibular dysfunctions and oligodontia or hypodontia have been described in people with Marfan syndrome [2, 8, 12]. An increased prevalence of pulp calcifications has also been demonstrated [3]. An increased incidence of periodontal disease is controversially discussed in literature, but could not be confirmed by our research group [30–32]. The dentition of patients with Marfan syndrome often shows crowded teeth, making effective oral hygiene at home more difficult and therefore a higher caries prevalence seems quite understandable. Apart from case reports de­scribing a high incidence of caries [5, 13], there is only one case-control study that has investigated carious lesions in people with Marfan syndrome. In this study, published by De Coster et al. in 2002, 23 people with Marfan syndrome (Marfan group) were examined and compared with 69 randomly selected people (control group) [8]. While there was no significant difference between the Marfan group and the control group when all study participants were examined, the DMFT index in the age group from 0 to 17 years was significantly higher in the Marfan group than in the control group. As a limitation, it must be mentioned here that there was no representative number of cases (n = 8) in the Marfan group and that the DMFT index was only presented as a total value and not in its individual components.

The aim of the present study was therefore to investigate the caries experience in children with Marfan syndrome in a larger number of cases and in a detailed manner. The hypothesis formulated was that children and adolescents with Marfan syndrome do not have an increased caries experience compared to a systemically healthy control group with a comparable age structure and gender distribution.

The study was approved by the Ethics Committee of the Hannover Medical School (No. 5113). In children of the Marfan group, the diagnosis of classic Marfan syndrome had to be confirmed by molecular genetic examination. The examinations of these children were carried out at the Department of Conservative Dentistry, Periodontology and Preventive Dentistry of the Hannover Medical School as well as at the annual conferences and parent-child seminars of the self-help group “Marfan-Hilfe (Deutschland) e. V.”. The children in the control group were in general medical health and were recruited and examined in a private dental practice. All clinical examinations were performed by a dentist (NW).

The dental examination was performed according to WHO criteria [34]. For this purpose, magnifying glasses, cotton rolls for relative isolation and examination instruments consisting of 2 flat dental mirrors, dental tweezers and a diagnostic probe were used. Examinations, which were carried out at the annual conferences and parent-child seminars of the “Marfan-Hilfe (Deutschland) e. V.”, were performed with the help of a chair with head and neck support and a portable LED lamp. With the help of the dental findings, the dmft and dmfs indices for the teeth of the first dentition and the DMFT and DMFS indices for the teeth of the second dentition (decayed, missing, filled, teeth, surfaces) were calculated in order to assess the dental hard tissue [21]. For further differentiation, the dmft/DMFT and the dmfs/DMFS were subdivided into the individual components dt/DT, mt/MT, ft/FT and ds/DS, ms/MS, fs/FS, respectively. For children and adolescents with a dmft or DMFT > 0, the caries restoration index (CRI) was calculated using the following formula: CRI (deciduous teeth) = (mt ft) / dmft × 100 in percent; CRI (permanent teeth) = (MT FT) / DMFT × 100 in percent [33].

The hygiene index (HI) was used to assess oral hygiene at home [25]. For this purpose, the teeth were stained with a plaque revelator (Mira-2-tone; Hager & Werken GmbH & Co. KG, Duisburg, Germany) and evaluated at 4 measuring points (mesial, buccal, distal and oral). The HI was calculated using the following formula: sum of plaque-free sites/sum of all sites x 100 in percent.

Evaluation of the data was performed using the statistics program IBM SPSS Statistics 26 for Windows (IBM, Armonk, NY, USA). For the group comparison (Marfan versus control group), the t-test for independent samples and the chi-square test were used. All tests were bilateral with a significance level of p ≤ 0.05.

Classical Marfan syndrome is an autosomal-dominant inherited connective tissue disease caused by an FBN1 mutation [23, 26]. Apart from an increased incidence of tooth crowding and the resulting difficulty in oral hygiene, patients with Marfan syndrome do not exhibit any structural features in the area of the tooth crown that promote the development of caries. In a recently published animal study on tooth development, for example, it was shown that FBN1 is not expressed during the development of the crown of the tooth, but only during the development of the root [20]. The hypothesis of the present study was that children and adolescents with Marfan syndrome do not show increased caries experience compared to a systemically healthy control group.

Overall, the results of our study show that children and adolescents with Marfan syndrome do not have an increased caries experience. The hypothesis formulated in the introduction was thus confirmed. It should be mentioned at this point that the group sizes are quite small, with a case number of 31, and that further investigations are necessary for representative statements. The reason for the low caries experience in the Marfan group is probably the consistent implementation of suitable prophylactic measures. These consist of a healthy diet, effective biofilm management, targeted fluo­ride application and regular visits to the dentist [14, 27]. As a limitation, it must be mentioned that these measures for caries prophylaxis were not included in our study. Another reason for the low caries experience could be the fact that a large part of the families affected by Marfan syndrome participated in activities of the self-help group “Marfan Hilfe (Deutschland) e.V.”. Studies on the topic of self-help have shown that self-help groups make a significant contribution to the personal development and behavioural change of persons with disabilities through the exchange of experience and the provision of information [4]. This leads to a more reasonable utilization of services of the professional care system (the health care system) and an above-average level of cooperation. For the children and young people of the Marfan Group, it can also be assumed that they have received particularly attentive care from their parents with regard to their dental and oral health.

In conclusion, patients with Marfan syndrome have an increased risk of endocarditis and therefore occupy a special position in dental practice. In order to avoid unnecessary dental treatment, the prevention of caries in the first and second dentition plays a decisive role. 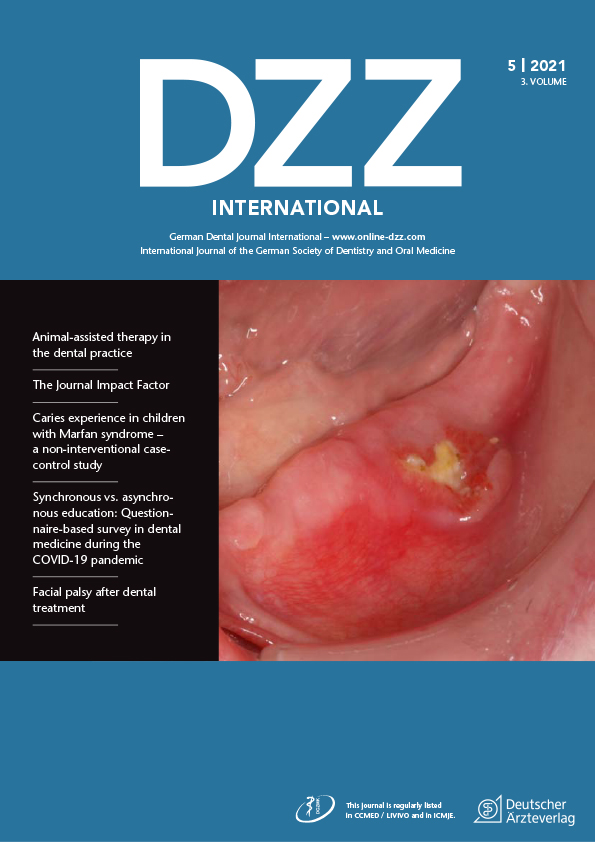