Overview: The update of the guideline on “diagnostics and management of precursor lesions of oral squamous cell carcinoma in dental and oral medicine” began in 2017 and was finalized in April 2020 after a total of 3 formal consensus processes. It was coordinated by the German Society of Dental and Oral Medicine (DGZMK) and the German Society for Oral and Maxillofacial Surgery. Specifically, the guideline updates the knowledge and recommendations, particularly the following aspects:

– specific designation of examinations, whose significance is not supported with reliable study data

It‘s the guidelines’ aim to record the current state of knowledge for a relevant problem in health care and if possible, draft key statements in the form of clear recommendations for action. For this, regular updates are necessary in order to keep up with the development of scientific knowledge. Having said this, the update of the guideline “diagnostics and management of precursor lesions of oral squamous cell carcinoma in dental and oral medicine” was started in 2017 and finalized in April 2020. It was carried out by the German Society for Dental and Oral Medicine (DGZMK) and the German Society for Oral and Maxillofacial Surgery. The update of the guideline was added to the list of prioritized topics of the task force of DGZMK, BZÄK and KZBV, which consisted of representatives of DGZMK, KZBV and BZÄK.

The authors of the guideline conducted current literature research (Medline) until 2018 to draft the recommendations and background text and included the relevant literature in the guidelines. Based on the existing guidelines, the coordinators revised the document in the first step and added current literature. Simultaneously, certain wordings were clarified that had led to misunderstandings in the past, and a formal division between recommendations and statements was included. The referencing of other guidelines was also updated.

This draft was the basis of a formal Delphi method with two Delphi rounds and a conclusive consensus conference with the participation of elected representatives of professional societies on 23.01.2019 in Cologne (see Tab. 1) under methodical moderation of AWMF. Within this consensus conference, the key statements and additions in the context of literature were discussed and a formal and structured consent added to the methodology of a nominal group process. Because this is an S2k guideline, a more detailed evaluation of studies in the sense of an evidence grading or even weighting and synthesis of study results did not take place.

The state of research and the decision criteria of recommendations were renewed in form of background texts as in the previous version, which were included in the extended version of the guideline. Since these texts create references to relevant literature, they are displayed here for information.

Compared to earlier versions of the WHO classification, a reduction of degrees of dysplasia is introduced in the form of a binary classification. Ultimately, the three traditional degrees of dysplasia are reduced to a “low grade” group and a “high grade” group, which essentially corresponds to the clinical risk assessment and signals a distribution into “low risk” SIN and “high risk” SIN. In earlier nomenclature, high grade intraepithelial neoplasia (SIN 3) included the carcinoma in situ of earlier classifications (carcinoma risk of 90 %) [3, 5, 15, 27], (see overview 1).

The proliferative verrucous leukoplakia (PVL) has a special status, because the morphological degree of dysplasia does not correlate with the clinical risk potential. Even though low degrees of dysplasia are typically found in PVL or can be missing completely, a highly malignant transformation rate (about 70 %) and consecutively high tumor-related mortality is expected with this entity.

The recommendations for action are based on the fact that oral lesions that are evaluated as “suspicious” for malignant transformation. Apart from the chronological development (persistence of a lesion for more than 2 weeks) the following clinical criteria should be regarded as indicators suggestive of a malignant transformation,

The algorithm for complete examination of the oral mucosa was updated (Fig. 1).

Examinations, whose significance is not supported with reliable study data:

The description of research methodology was upgraded and newly structured. Specifically, a group of exami­nations is designated whose significance is not supported with reliable study data.

Examinations, whose significance is not supported with reliable study data:

The background texts were updated to help explain.

a) Intravital staining with toluidine blue

Methods of intravital staining of the oral mucosa for specific emphasis of malignant lesions on basis of toluidine blue have been described for more than 40 years. The basic principle postulated is the increased binding of the dye with DNA-affinity in tissues with higher cell conversion [19]. On a molecular level the association between chromosomal changes (e.g. 3p/9p LOH) and staining behavior of oral mucosa changes were shown [30].

The accuracy in clinical investigations is variable, there are values of 38–98 % for sensitivity and a range of 9–93 % for specificity [4, 19, 20]. Despite the long-term availability and a large number of literature notifications, only a few studies address the application of toluidine blue in order to detect oral mucosa lesions that have not already been previously recognized clinically [12]. In addition, more authors are critical of the low accuracy for potentially malignant oral lesions with a sensitivity of under 50 % [9, 16, 18].

Overall, the big effort involved with chairside application has prevented the clinical implementation of staining and the expansion of the methods and usage in dental practices. In literature, there is no data on the application in primary care. After more than five decades, a relevant development and expansion of the method is not to be expected.

b) Chemiluminescence and autofluorescence diagnostics

In the last few years, the procedures for chemiluminescence and autofluo-rescence diagnostics were examined as supportive visual tools in detecting potentially malignant oral lesions and oral carcinomas in different studies. In the process of the chemiluminescence source of light, the oral mucosa is pretreated with 1 % acetic acid. Possible modifications in the keratinization are supposed to show up in white and then stand out after subsequent treatment with toluidine blue. In autofluo­rescence diagnostics, dysplastic or neoplastic lesions are supposed to show up darker compared to healthy (green) oral mucosa, due to the loss of fluorescence. Koch et al. (2010) were able to show a high sensitivity of 93 % in a patient collective (N = 78) with conspicuous clinical mucosa lesions in the examination using autofluorescence diagnosis, however, the specificity was only at 13–17 % [11]. In the study of Mehrota et al. (2010) both visual methods came into effect and showed sig­nificantly worse results [17]. The procedure with autofluorescence showed a sensitivity of 50 % and a specificity of 38.9 % in 156 exam­ined lesions. When applying chemiluminescence in 102 examined lesions, the sensitivity was at 0 and the specificity at 75.5 %. Further studies that investigated these procedures showed similar critical, unsatisfactory results [1, 2, 8, 21, 22]. The inhomogeneous and inadequate data shows no scientific basis for the application of either visual procedure in early detection of potential malignant oral lesions and oral carcinomas.

Another visual method that was evaluated in studies for early detection of oral carcinomas and potentially malignant oral lesions in the last few years is the narrow band imaging from other areas of surface diagnostics in the oral cavity in studies. The method used two narrow-banded frequency domains (400–430 nm and 525–555 nm) in order to depict differences in vessel plexus instead of continuous frequency spectrum of white light. Yang et al. (2012 and 2013) showed a sensitivity of 96.3 % for the narrow band imaging using a patient collective of n = 317 and a specifity of 60.1 % compared to white light with 87 % sensitivity and 93.5 % specificity. However, the transferability of the results and a potential recommendation is only possible to a limited extent, because in studies from Asian countries, many lesions are buccal lesions, caused by the enjoyment of betel products and therefore many localisations for lesions were underrepresented [28, 29]. A systematic review from 2014 [26] came to the conclusion that this method has diagnostic potential, however, a statement for recommendation in the field of early detection is not possible due to the insufficient and inadequate data.

Also the background text on measures of demarcation of inflammatory/irritating phenomenons was extended and specifically, the intralesional therapy with corticoid was included.

For a symptomatic lichen ruber the local treatment using steroids is the therapy of choice [13]. There is not enough evidence for a recommendation of a specific steroid therapy regarding the outcome of “pain reduction” [24]. This was also confirmed by the study of Liu et al. (2013) [14]. They could, however, determine a positive therapy effect of an intralesional therapy with betamethasone compared to therapy with triamcinolone in their randomized, controlled study regarding the outcome “recurrence of a lesion within three months”.

Unresponsiveness to steroid application confirms the indication of a biopsy [23].

For extensive oral mucosal lesions with chronic progression (for example with a proliferative verrucous leukoplakia) there is the problem that on one hand, representative localisations (e.g. most advanced in tumor progression) can sometimes not be defined, and on the other hand, a complete diagnostic excision especially in cross-regional lesions can imply the perioperative morbidity of a tumor resection or is not technically feasible in multifocal lesion. In these rare cases, the large surface coverage of the brush biopsy (reduction of “sampling errors”) must be weighted against the greater diagnostic accuracy of the excision biopsy (lim­ited to the excised tissue).

There is additional information available in the form of a more detailed guideline report. The documents can be downloaded from the websites of the AWMF, BZÄK and the DGZMK. The next update is planned for 2025.

The authors state that there is no conflict of interest within the guidelines of the International Committee of Medical Journal Editors.

Clinic for Oral and Maxillofacial Surgery

Clinic for Oral and Maxillofacial Surgery 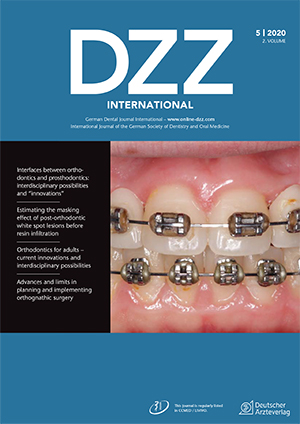