Update of the S3-Guideline “Implant-prosthetic rehabilitation in the edentulous maxilla” – What is new?

Summary: In 2013, the first version of the S3-guideline “Implant-prosthetic rehabilitation in the edentulous maxilla” was published [7]. The professional society that released the guideline (Deutsche Gesellschaft für Implantologie e.V.) invited participants to attend a new guideline conference in September 2019. The results from this conference, where representatives from a total of 15 professional societies participated, have now been published in the form of a recent update. In preparation for the update, a systematic literature search in the relevant databases was repeated and the retrieved literature was assessed; this resulted in the inclusion of 11 additional studies. Exclusively titanium implants were examined. The superstructures were fixed (one-piece, screw-retained) or removable (mostly bar-retained). The key recommendations relating to the number of implants were checked and confirmed. In total, 14 new recommendations and statements were included; many of these are related to fixed restorations on 4 implants.

The aim of this guideline is to provide evidence-based treatment recommendations to dentists and specialists practicing implantology. These recommendations are based on both the latest scientific knowledge and the individual know-how (experience, expertise) of specialists in the domain.

The update of the systemic guideline and literature search was performed based on the keywords and search strings already used in the first version; the websites www.awmf-online, www.leitlinien.de, www.g-i-n.net, and www.guideline.gov, in addition to the electronic databases PubMed, Cochrane Library and DIMDI, were used. A manual search was conducted in various German journals as well. After the assessment of the literature using methodology checklists according to “SIGN 50 – A guideline developer’s handbook” [1], 7 prospective clinical trials [2–4, 6, 12, 13, 15] and 4 randomized controlled trials [8–11] were finally included. These further corroborated the results of the 16 already existing studies.

The included studies ranged in duration from 3 to 11 years. In total, 1093 patients who were treated with 2–8 implants and either a removable or fixed superstructure were examined. The majority of the restorations were one-piece, screw-retained implant-supported FPDs and bar-retained overdentures. In a few cases, telescopic or ball attachment systems were used; in only one study, patients were treated with multiple, separately cemented implant-supported FPDs. Details can be found in the evidence table of the guideline and methods report.

Work on the guideline began already in 2010. Since then, it has evolved considerably and grown in comprehensiveness over the course of a decade. Although the first version and the ensuing updates contained recommendations which mainly referred to the number of implants to be used, based on the type of restoration (fixed or removable), the updated version now offers both new and partly modified recommendations and statements on the following topics: timing of loading, treatment planning using digital volume tomography (DVT), patient compliance, (palate-free) prosthesis design/stabilization, selection of retention elements, full-arch restorations and oral health-related quality of life. All recommendations and statements were approved in an independently moderated, structured consensus process (details are available in the methods report).

The decision in favor of or against an implant-supported prosthetic restoration in the edentulous maxilla must always be made together with the patient. In this regard, when patients consider which restoration best suits their needs, they must be informed about the advantages and disadvantages of the various forms of treatment, as well as, the possible risks and complications associated with them. The prospective tooth positions are determined on this basis and the optimal implant positions can be derived accordingly. Moreover, necessary pre-prosthetic procedures are also derived based on this knowledge, especially with regard to bone augmentation forms, which in turn discloses important information for patient education and planning.

Another detail that should not be neglected is the patient’s self-care requirements. This includes, among other things, the patient’s ability to maintain an adequate oral hygiene and to attend regular follow-up appointments. An accurate assessment of whether the patient’s motoric abilities permit the handling of a removable prosthesis is essential. The manual dexterity to insert the prosthesis as well as the existence of sufficient strength to remove the prosthesis should be considered.

2.2. Recommendations regarding the number of implants and fixed or removable restoration concepts

The primary objective of the guideline was to answer the following key question: What is the appropriate number of implants for a given type of prosthesis in the edentulous maxilla? Due to the newly acquired evidence, the indications have been expanded, especially in the area of restorations on 4 implants. For more than 5 implants, the statements of the guideline have remained the same, but are included below for the sake of completeness. Examples of clinical cases for a removable and a fixed restoration according to these recommendations can be found in Figures 1–10.

In principle, as retaining elements for removable restorations, ball attachments, double crowns and bars can be used. In order to provide the practitioner with decision-making aids in this regard, the following consensus-based recommendations were made on the basis of the available literature.

When patients are rehabilitated using fixed restorations, one of the key decisions relates to the type of fixation that should be used, i.e. screw-retained or cemented. The current update also provides new consensus-based recommendations in order to give the practitioner an important decision-making aid in this regard (see also Fig. 6–10).

An increasing number of studies take into account patient satisfaction, chewing ability and the change in the oral health-related quality of life which results after each respective treatment. As part of the 2019 update, the authors of the guideline used the chance to include the studies mentioned in the evidence table, provided that they supplied information relating to the above-mentioned points. Also, 2 noteworthy studies on the topic of patient satisfaction were identified [5, 14]. The existing clinical studies strongly support the fact that edentulous patients, who have been rehabilitated with implant-supported superstructures in the maxilla, are generally very satisfied with the restorative treatment.

The rehabilitation of the edentulous maxilla with fixed or removable restorations, supported on 4 or more implants, is a reliable treatment option with high implant survival rates. The updated guideline substantiates the statement that no fewer than 4 implants should be placed in the edentulous maxilla. 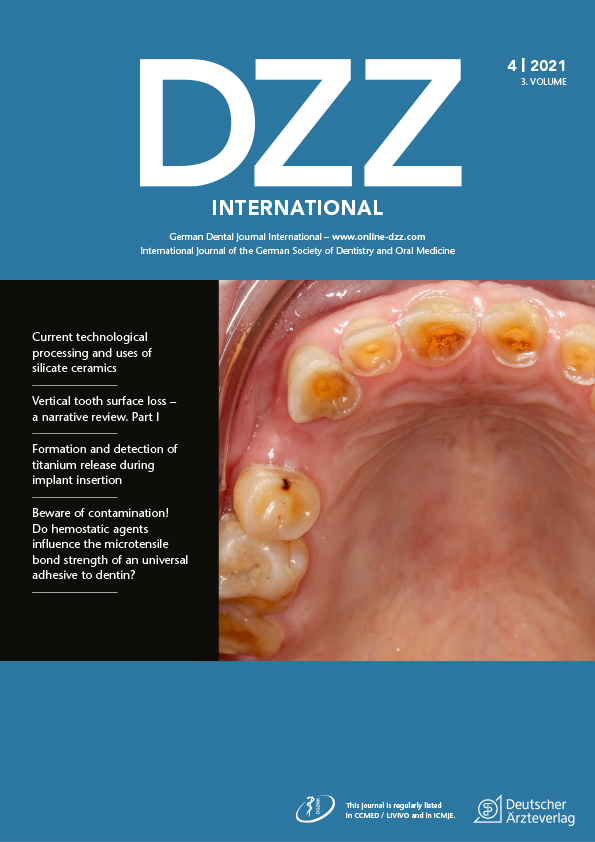