Psoriatic arthritis and the temporomandibular joint

What are the implications of pso­riatic disease in dentistry?

Psoriasis has a complex clinical profile with many different forms (Fig. 1); these may be associated with inflammatory altered joints, enthesitis, spondyloarthropathies of the spine, dactylitis, characteristic scaly skin changes as well as tongue and nail changes [7, 9, 24]. We distinguish an early form (onset at the age of 10–25 years) in the case of corresponding genetic disposition and a later form (onset at the age of 35–60 years), which generally shows no familial clustering. The special form of psoriatic arthritis has only been classified as an independent clinical picture since the 1960s and has been distinguished from rheumatoid arthritis with parallel skin changes. Psoriatic arthritis may have regionally variable incidences (0.05–0.24 %) [11]. Its prevalence among patients with psoriasis has been reported to be around 6–41 % [17]. The disease has relevance in dentistry because the temporomandibular joint and the mucosa of the oral cavity, including the tongue, may be affected.

Clinic. Psoriatic arthritis mostly manifests between the 30th and 55th year of life. As a rule, disorders in the temporomandibular joint only appear years (~10 years) [5] after the onset of the skin and nail changes (Fig. 2), the characteristic swelling of the finger joints, or after the onset of disorders in other joints. In some cases, arthritis of the temporomandibular joint may occur as the initial manifestation of psoriatic disease. Dental practitioners then have the responsibility of establishing the course of treatment and referring patients to the appropriate specialists. At present, if psoriatic arthritis is recognized and treated in time, damage to the joints can be avoided or significantly reduced [27].

Classification and forms of psoriatic arthritis. Based on topog­raphy and structural differences, four forms can be distinguished [19]. Along with them all the above-mentioned pathological patterns can occur. The four forms are:

In addition to complaints in the joints, changes in the skin, skin appendages and soft tissues are also relevant for the diagnosis and therapy of patients.

In the oral cavity, psoriasis rarely occurs on the lips, and to a reduced extent, on the oral mucosa. According to Hornstein [14], this is explained by the fact that there is a 5 to 7 times higher proliferation rate of the oral mucosa compared to the epidermis of the outer skin. Thus, the proliferation rate of the outer epidermis in psoriasis is approximately the same as that of the oral mucosa. Therefore, the effects of psoriatic disease virtually do not appear on the oral mucosa. On the dorsum of the tongue, however, the conditions of keratinization are different. As a result, an erythematous tongue with pronounced exfoliation and pustule formation may occur in the marginal zones (geographic tongue) [18] (Fig. 3). The lingual papillae may be flattened and therefore distinguishable from the healthy papillae (Fig. 4).

Nail changes. About 80 % of all patients with psoriatic arthritis develop changes in the nails (spotted nails), which are referred to as onycholysis and psoriatic onychodystrophy (Fig. 2). The changes affect the nail matrix as well as the nail bed [3]. The functional connection of the nails with the distal interpha­langeal joints of the fingers, especially the extensor tendons (M. extensor digitorum communis and possibly M. extensor digitalis minimus, among others), may explain the frequent combined occurrence (80 %) of joint and nail changes in psoriatic arthritis [2]. Affected nails show red spots, pitting, and scarring, as well as a friable structure of the nail surface. Toenails mostly show a yellowish-orange discoloration of the nail which is called the “oil drop” phenomenon [3]. The cause of these morphological changes is a disturbed keratinization of the nail. Characteristic of nail psoriasis is subungual (located under the nail) hyperkeratosis, which distinguishes it from onychomycosis [1].

Enthesitis/daktylitis. The term “enthesis” refers to the connective tissue which connects tendons, ligaments, capsules and fascia to bone or muscle tissue. This area is subject to intense mechanical stress. Enthesis is closely connected with the synovial tissue of the joints. The two form the synovial-entheseal complex (“enthesis organ”) [15]. In case of increased mechanical stress, genetic predisposition and possible bacterial infections, genes are activated that encode proteins responsible for the immune response or tissue compatibility (histocompatibility, HLA-B27). Animal studies suggest that in psoriasis/pso­riatic arthritis there is an autoimmune reaction against proteoglycans and proteins of cartilage fibroblasts as well as against BMP (bone morphogenetic protein). As a result, interleukin-23 (IL-23) is released, which activates immune defense T-cells. These in turn release IL-17, IL-22 and TNF-a (tumor necrosis factor) [15]. Subsequently, an inflammation of the joint structures occurs.

In the case of dactylitis, tendosynovitis, edema of the peritendinous soft tissue („sausage finger“), enthesitis, and less frequently synovitis is present [20]. The pathogenesis of dactylitis is not clearly understood. However, animal studies suggest that IL-17, IL-22, and TNF-a as well as IL-6 and the Dickkopf-related protein 1 may play a role, [2].

Differential diagnoses. The differentiation of psoriatic arthritis of the temporomandibular joint from rheumatoid arthritis with skin lesions [7], temporomandibular joint arthritis associated with SAPHO syndrome [4], gout [8, 22], and arthritides associated with inflammatory bowel diseases such as Crohn’s disease [6] is not always straightforward. An overview is provided in Table 1 (Tab. 1).

Imaging. X-ray imaging shows erosions and irregular bone contours as well as new bone formation. Radiopaque calcifications are found in soft tissues. However, conventional x-rays are not considered the optimal imaging modality for pso­riasis. The characteristic soft tissue changes with enthesitis, changes in the joint capsule, focal soft tissue thickening as well as soft tissue and bone edema can be visualized better using magnetic resonance imaging. In cases of dactylitis and enthesitis, ultrasound examinations are also recommended, but these are usually not relevant for dental diagnosis.

Orthopantomograms and magnetic resonance imaging are particularly useful for diagnosing psoriatic arthritis of the temporomandibular joint in dentistry. Erosions, irregular bone contours as well as new bone formation are usually well represented on X-rays. Magnetic reso­nance imaging also shows active inflammatory processes in the soft tissues as well as cystic changes in the region of the mandibular condyle (Fig. 5, Fig. 6).

Treatment. Therapy is primarily administered by rheumatologists and dermatologists. Non-steroidal anti-inflammatory drugs and corticosteroids remain in use as initial treatment for acute symptoms. Since psoriatic arthritis is not a benign disease but is associated with increasing irreparable joint destruction, the early use of immunomodulators is indicated. These include TNF-α inhibitors (e.g., adalimumab, infliximab, golimumab) and substances that affect interleukins such as IL-12/23 (e.g., guselkumab, tildrakizumab, risankizumab, ustekinumab) or IL-17 (e.g., ixekizumab, bordalumab, secukinumab). Other available therapies are Janus kinase inhibitors (tofacitinib) and PDE4 inhibitors (apremi­last). These therapeutic concepts are individually adapted to each patient’s case. Corresponding therapy guidelines have been published by professional societies such as the European League Against Rheumatism (EULAR) and the Group for Research and Assessment of Psoriasis and Psoriatic Arthritis (GRAPPA) [12, 22].

The main objective of the dentist is to check the occlusion and to rebuild it at least provisionally in case of a loss of supporting zones. Adjustable bite splints such as the Michigan splint, in combination with physiotherapy, can help to relax the muscles and to prevent possible loadings of the joints. Splints with an anterior jig are contraindicated. Furthermore, a key responsibility of the dentist is to inquire whether or not patients have already presented themselves to a rheumatologist, so that an immunomodulatory therapy can be initiated promptly. Numerous patients with psoriasis, who have not commenced treatment, or have not been treated adequately, continue to be identified. Since psoriatic arthritis is a progressive destructive joint disease, the timely initiation of immunomodulatory therapy can largely prevent or at least limit joint destruction. This improves the quality of life of patients considerably [7, 13].

Knowledge of psoriasis/psoriatic arthritis disease is important for the dentist due to the following reasons:

The authors declare that there are no conflicts of interest as defined by the guidelines of the International Committee of Medical Journal Editors. 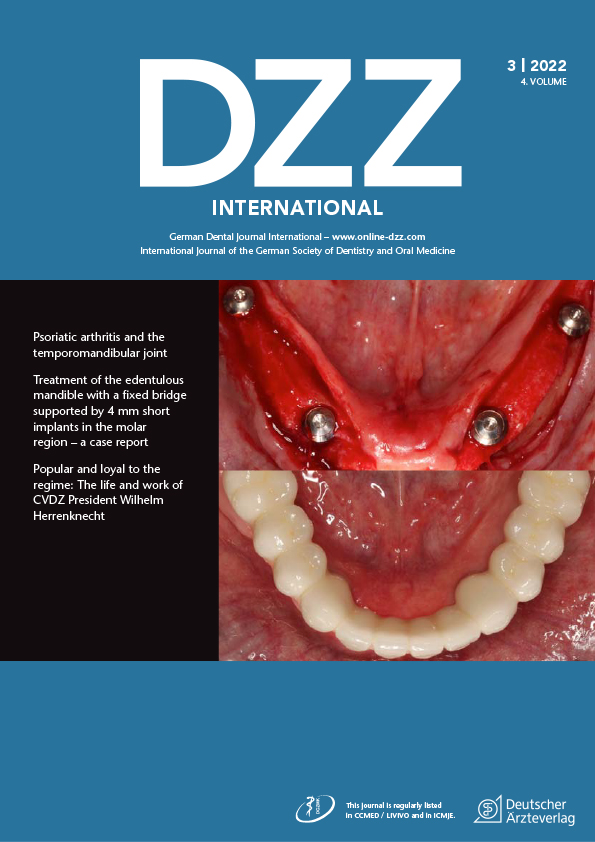