A considerable proportion of the population avoids healthcare [8, 14, 16], even when people may be aware of the need for treatment [17]. This well-known problem applies to dentistry as well, as about 7–10 % of the total German population avoids visiting the dentist [5].

The research field of “Healthcare Avoidance” (HCA) deals with the problem of patient avoidance or delay of examinations or treatments. HCA is an interdisciplinary field of research involving medicine, social science and psychology, in which the causes of avoidance behavior, the early identification of risk patients and possible concepts for improving the current situation are examined.

The following text presents an overview of literature relating to this phenomenon.

A review of literature shows that the topic of HCA has been much more frequently investigated in general medical subjects than in dentistry. There is a large number of available studies that explore the causes of HCA, yet research which deals with approaches to solving the problem of HCA is still relatively rare. Due to the high number of factors related to HCA and the associated difficulty in identifying affected patients or groups, research related to attaining a concept for early identification is crucial.

Qualitative interviews are often used to determine the reasons of physician avoidance. The most commonly used variant is the semi-structured interview; in this case, the areas to be investigated are defined on the basis of key questions, yet the interviewer or respondent can still elabo­rate on topics or thoughts [6]. Questions regarding physician avoidance are also often part of large-scale studies, such as the Health Information National Trends Survey (HINTS) in the USA, which can serve as a foundation for other investigations [8, 12, 16, 17]. The 5th German Oral Health Study (DMS V) also examines the oral health attitudes and behaviors of German citizens [7]. The aim of the investigations is to create a scheme which facilitates the identification of affected patient groups and individuals in order to reveal areas in healthcare that need improvement.

A large number of studies on discipline-specific diseases highlight the problem of HCA. The problem of HCA was emphasized in the study performed by the research group Moser and Kimble et al. (2006) on the topic of delayed treatment of patients with acute coronary syndrome, on the one hand, and acute stroke on the other; they point out the impor­tance of social, cognitive and emotional factors in both cases, which can only be ascertained by means of interviews or questionnaires, thus making it rather challenging to collect and classify data [10].

In a meta-study, Bish et al. (2005) investigated the reasons for the delayed presentation of women with breast cancer and found that higher age, the type of symptoms, lack of trust in the family physician and fear of cancer treatment led to delays [3]. A study by Rogers et al. (2011) showed that patients with oropharyngeal carcinomas usually presented themselves late to the physician due to their lack of awareness of the associated clinical symptoms; in this case, going to the doctor or dentist was perceived less of a barrier by the patients [13]. Persoskie et al. (2013) also demonstrated a strong emotional factor by linking the fear of cancer and the self-assessed risk of cancer with doctor avoidance. Interestingly, the combination of existing fear and increased cancer risk was found to lead to increased avoidance of medical treatment for respondents aged 50 years and older [12].

These examples illustrate the high variety of reasons for avoiding doctors in relation to each specific general medical discipline. In the USA, regional differences were presented by Spleen et al. (2014). The researchers reported an increased incidence of physician avoidance among participants of the male sex, of younger age, having no health insurance, having little trust in their general family physician or having no general physician at all as well as among the rural population [16]. Similarly, Ohl et al. (2010) found a correlation between rural populations and a delayed onset of treatment, which consequently resulted in an increased mortality rate among HIV patients [11]. By interviewing 4162 patients aged 65 and older, Rupper et al. (2004) investigated whether or not self-disclosure with regard to delayed healthcare treatment due to doctor avoidance is a general predictor of an increased mortality rate; no correlation between doctor avoidance and increased mortality could be determined [14].

Research in dentistry mainly focuses on dental anxiety, which is an important aspect that possibly leads to dental treatment avoidance and the associated problems in healthcare.

In this field, Armfield et al. (2015) showed that two thirds of all respondents with a pronounced fear of dental treatment tend to delay visits to the dentist [1]. According to a study by Enkling et al. (2006), younger people are more often affected by dental anxiety than older people, and women more often than men. The reasons for anxiety are painful experiences during treatment and fear of needles in 67 % and 35 % of cases, respectively [5]. Berggren et al. (1993) addressed this topic early on after finding a direct link between pronounced dental anxiety and dental care avoidance and poorer oral health; in their investigation, they reported social and emotional effects on affected patients and found that the majority of these patients reported negative effects on social life, including loneliness and social isolation [2].

A correlation between parental dental care avoidance behavior and an increased caries prevalence in 5-year-old children was found by Wigen et al. (2009). They showed that children who were not regularly taken to the dentist by their parents were more likely to develop carious lesions [18].

McGrath et al. (2007) demonstrated a significant influence of socioeconomic status on the neglect of oral health [9]. Similarly, the DMS V (Jordan et al., 2016) also found that, in a group of younger adults (35 to 44-year-olds), those with a low social status tended to visit the dentist irregularly and mainly in a manner which was complaint-oriented; conversely, patients with a high social status tended to visit the dentist in a prevention-oriented manner [7].

In order to determine an interdisciplinary categorization for patients who avoid visits to the doctor, Taber et al. (2014) conducted a study with 1369 participants in which 3 main categories were identified: 33.3 % of the respondents mentioned that they were late to visit the doctor because of “unfavorable evaluations of seeking medical care”, which included factors such as the trustworthiness and expertise of the doctor, long waiting times and communication problems; 12.2 % of respondents reported a low perceived need to see a physician because they underestimated symptoms for instance, while 58.4 % reported “traditional barriers to medical care” such as high costs, no health insurance and time constraints as reasons for avoiding the physician. Limitations of this study are seen as the lack of question “depth” in relation to medical treatments, fear of serious illness and the association of doctors with death. Further limitations were seen in the demographic distribution of the respondents [17].

The team of Kannan et al. (2014) used a classification scheme based on 8 reasons to which 81 % of all phy­sician avoiders can be assigned: Fear of serious illnesses (34 %), discomfort during physical examinations (33 %), costs (19 %), time constraints (16 %), thoughts of death (13 %), lack of sympathy or trust towards doctors (8 %), fear of treatments involving medication (3 %) or the preference for self-treatment or alternative medical treatments (3 %). The authors described different possible interventions that could help to reduce the frequency of doctor avoidance. Firstly, health-conscious behavior should be encouraged. Information which tries to reduce the fear of examinations, treatments and diagnoses could aid in increasing patient motivation; this information should be individualized so as to be relevant to the motivations of different groups of people. Also, it is recommended that more educational work should be done to eliminate misconceptions such as the idea that obesity is exclusively genetically determined.

Kannan et al. also proposed media and communication campaigns that portray the desired patient behavior. Another possibility could be the introduction of the concept of a proactive attitude on the part of the patient, in which the patient actively and committedly engages himself/herself for his/her health. Another important intervention according to the authors involves the closer cooperation between doctors and insurers on the one hand, and between doctors and patients on the other. In this way, more patient compliance, understanding and satisfaction could be ensured [8].

According to Enkling et al. (2006), people surveyed in the field of dentistry stated that they wished for detailed communication with regards to treatment, a sensitive dentist and painless treatment [5].

One possible strategy that was developed by Skaret et al. (2003) and was presented as being very promising involves the use of a questionnaire, followed by a motivational telephone interview, in order to reduce dental treatment avoidance [15].

Healthcare avoidance is a widespread, multidisciplinary problem in health care which is linked to the doctor-patient relationship as well as administrative, demographic and personal factors such as distrust of doctors and/or science, health beliefs, insurance status or socioeconomic status [4]. Methods which can identify patients or groups at risk allow for a more accurate representation of the complex motivations behind HCA. It has been shown in many specialist areas that personal factors, particularly, play a major role in avoidance behavior. In order to adequately determine these factors, a standardized concept that can be applied in ideally both, general and dental practice, would be desirable so that patients at risk can be identified and appropriate therapeutic measures can be taken. In dentistry, there are already studies on the handling of anxiety patients; however, the development of a concept which is applicable to other aspects relating to HCA is still pending. Communication strategies, such as intensive doctor-patient communication, appear to be particularly important in addressing avoidance behavior and increasing patient compliance. 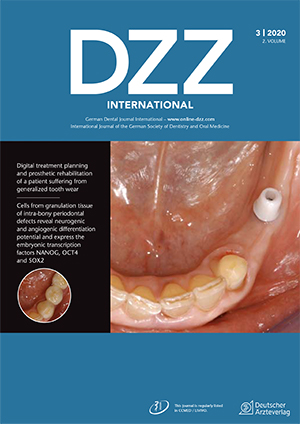