What is the importance of the de­glutition act/swallowing reflex with regard to the regulation and feedback mechanisms of the stomatognathic system?

The deglutition act represents one of the most frequent motor functional processes in our body, which coordinates more than 50 pairs of muscles. It can be understood as a complex reflux event. In the wake state, we swallow around 0.5–1.5 ml of saliva per minute, mostly unconsciously. During deep sleep, salivation and swallowing activities are largely at rest [1]. In addition to regulating salivary flow, the deglutition act also appears to have an important influence on the regulatory and feedback mechanisms of the entire stomatognathic system. Since the lower jaw usually moves dorsally and the dental arches of the maxilla and mandible come into brief contact during the swallowing act [2, 4, 7], a physiological sequence of the swallowing activity is essential for controlling the masticatory muscles. During the physiological deglutition act, feedback is provided via the receptors in the periodontal attachment apparatus, as well as, those in the masticatory muscles and temporomandibular joint; this feedback is responsible for establishing impor­tant control variables of the stomatognathic system, such as the rest position of the mandible when the masticatory muscles are relaxed. Each muscle works by shortening itself. However, a muscle which is constantly shortening (working) also requires information about what “length” it should maintain or set in the relaxed rest mode. Skeletal muscles, for example, use feedback from their direct antagonists’ activity for establishing their “length” at rest; hence, an interplay between “flexors” and “extensors” is involved. In the stomatognathic system, this simple interplay as it occurs in the extremities is not so obvious. It is also necessary to consider that the stomatognathic system has to serve two functions. On the one hand, it performs the function of mastication, while on the other hand, it is a part of the organ of speech, so that, different centers in the brain – which partially compete with each other – exert their control functions on the stomatognathic system [3]. In this manner, a “reset” through which the stomatognathic system always finds its physiological rest position represents a necessary set of rules for the undisturbed function of the stomatognathic system. The fact that the mandible can reliably and reproducibly be brought into the centric position during swallowing, and because this happens very frequently and unconsciously in the waking state, suggests that swallowing activity has an important control function. The occlusal contact which takes place between the upper and lower dental arches during the swallowing cycle generates a vertically acting force of approximately 30 N [7]. The occlusal forces that are elicited during swallowing can modify the resulting force system. The force is thus not constant meaning that there is a continuous increase and decrease.

Sequence of the deglutition act

The deglutition act is characterized by 3 partial processes [5, 8]:

After food is mechanically broken down and moistened with saliva, the deglutition act is triggered. The de­glutition act is divided into a preoral, oral, pharyngeal and esophageal phase. All phases transition smoothly into one another [1, 5]. The food bolus which is prepared in the preoral phase (women 14–20 ml, men 20–25 ml) [6] is positioned on the back of the tongue. The tip of the tongue positions itself against the upper anterior teeth and anteriorly against the hard palate. The lateral areas of the tongue lift up and form a spoon-shaped depression for the bolus. The posterior pharyngeal part of the tongue arches up and comes into contact with the soft palate. This initially keeps the bolus in place and prevents it from sliding into the pharynx (so-called glossopharyngeal sphincter) (Fig. 1).

The lips close and the mandibular incisors approach the maxillary incisors. The anterior two-thirds of the tongue pushes the bolus toward the pharynx using peristaltic movements. The hyoglossus and styloglossus muscles lift the tongue cranially and the palatoglossus muscles pull the back of the tongue dorsally (Fig. 2, Fig. 3). The dental arches come into contact. The soft palate is lifted by the tensor veli palatini and levator veli palatini muscles and pressed against the Passavant‘s ridge. This opens the auditory tube. The Passavant‘s ridge is formed by the contraction of the superior pharyngeal constrictor muscle. Together, the soft palate, Passavant‘s ridge and the posterior dorsum of the tongue seal the upper airway and prevent the bolus from passing prematurely into the pharynx. The anterior two-thirds of the tongue now generate peristaltic movements that briefly open the oropharyngeal isthmus and transport the bolus toward the pharynx (Fig. 2). In this phase, the floor of the mouth is lifted by the suprahyoid muscles. This causes the hyoid bone and larynx to be displaced cranially. The epiglottis is passively displaced over the laryngeal inlet. Reflex closure of the glottis and inhibition of the respiratory muscles follows. Further transport is achieved by rhythmic contractions of the pharyngeal constrictor muscles, especially the inferior pharyngeal constrictor muscle. In the esophagus, peristaltic waves that are generated by the esophageal muscles transport the bolus further on toward the stomach [5].

The entire mechanism of deglutition represents a regulatory feedback system (Fig. 4) with an afferent and efferent pathway. The former begins in the mucosa of the palatal arches, the base of the tongue and the posterior pharyngeal wall. This is where free nerve endings and nerve ending corpuscles are located in the mucosa. While the free nerve endings register the sensation of pain, the nerve ending corpuscles, Pacinian corpuscles (Fig. 5), Ruffini corpuscles (Fig. 6), Meissner tactile corpuscles (Fig. 7), among others, register the sensations of pressure, shock and tension. The structures made from glial tissue (lamellae, spheres, cylinders, branches, etc.) serve to enlarge the receptive surface [8] (like antennas) for the received stimuli. The afferent fibers of nerves IX and X are relayed in the medulla oblongata and run via the thalamus (center of sensation) to the sensorimotor cortex (region behind the central sulcus) of the cerebrum. The reticular formation of the medulla oblongata also contains the center of deglutition (Fig. 4), which regulates vegetative processes.

After being further relayed in the central nervous system, the efferent pathways (as pyramidal and extrapyramidal pathways) reach the muscles of the effector organs, including the pharynx, base of tongue, larynx, esophagus as well as the neck muscles, via the nuclei of the cranial nerves V, VII, IX, X, XI, XII and the cervical segments C1-C3 [5]. The de­glutition act can therefore take place cortically or subcortically depending on whether it occurs consciously or unconsciously. The causes of swallowing disorders (dysphagia) are varied and correspond to the phases of swallowing. For example, in functional disorders of the medulla oblongata such as bulbar palsy, dys­phagia is one of the cardinal symptoms [8].

The deglutition act is a highly complex reflux event in which we distinguish a preoral, oral, pharyngeal and esophageal phase. In total, swallowing involves more than 50 pairs of muscles, 6 cranial nerves as well as nerves of the cervical seg- ments C1-C3. With approximately 1000–2000 swallowing cycles taking place every day, swallowing represents one of the most frequent motor functional processes in the body. The act of deglutition not only serves the purpose of food intake and the reduction of the amount of saliva in the oral cavity, but it also plays an obvious and important role in the self-regulatory processes of the stomato­gnathic system such as the (re)setting of the rest position of the mandible. 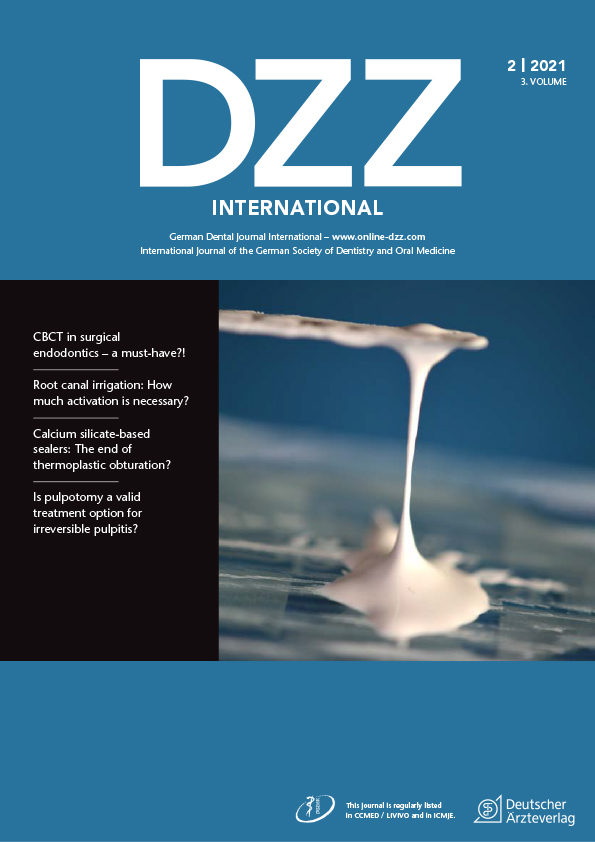