Can we easily just raise the vertical dimension of occlusion?

For esthetic and functional reasons, patients with visible attrition of their teeth often have the wish to compensate the loss of their tooth hard tissue (Fig. 1). Many dentists try to accommodate these concerns. In this regard, they reconstruct the original tooth shape by means of prosthetic measures such as by crowning the teeth or by applying veneers or table-tops. In doing this, the majority of dentists assume, that by restoring the original tooth shape and size, that they automatically reconstruct the original vertical dimension of occlusion. They simply equate the loss of tooth structure with a loss of bite height.

However, the question arises if the view that tooth hard substance loss automatically leads to a loss of the vertical dimension of occlusion (bite reduction) is correct. This view has been doubted for many years [2, 6, 8] and increasingly more in the last while [1, 10, 13]. Critics, like Dawson [8], believe that the occlusion’s vertical dimension remains largely at the same level in relation to the skull, even when the tooth structure is subjected to wear (Fig. 2). Hence, Dawson strongly warns against applying prosthetic restorations in cases that involve massive tooth hard tissue loss, where solely the original, esthetically correct tooth height and shape is taken into account. Due to the “overcompensation” of the supposed reduction of the occlusal vertical dimension, parafunctions are all the more likely to be triggered.

After the development of the 3 cotyledons (Fig. 3), an unpaired neural crest develops after the closure of the neural folds. From the neural crest, ectodermal cells, or so-called neural crest cells, migrate into the areas corresponding to the upper and lower jaws (Fig. 4). The neural crest cells use molecules of the extracellular matrix as a pathway for their migration. Subsequently, a first primitive oral cavity develops, which is lined with epithelial cells. In the area of these epithelial cells, there is a local increase in the number of cells with an accompanying ball-shaped growth in density [5, 11]. The odontogenic epithelium arises, which in interaction with the adjacent mesenchyme produces ameloblasts on the epithelial side and odontoblasts on the mesenchyme side (Fig. 5). Embryonic tooth development explains why teeth have the ability to maintain eruption in an occlusal direction and have a mesial migration tendency throughout their life. This ability is comparable to the lifelong growth of hair and nails, which are also of ectodermal origin. The logic behind the lifelong ability of our teeth to erupt and migrate in a mesial direction was described by Begg in 1954 [2] when he examined the teeth of Australian Aboriginal people. Owing to their diet, young adults already had considerable occlusal and circular tooth substance loss; the original cusps and their enamel were largely abraded. In spite of this, the dental arches were free of any gaps due to the migration and eruption processes of the teeth. Furthermore, the older the patients were, the more frequent were an end-to-end bite and a tooth-to-tooth relation. The currently accepted textbook-type of occlusion together with a sagittal step and an overbite was only present in adolescents. The authors Alt et al. [1] assume that the occlusal relations described above were widespread throughout our population until about 300 years ago. Nowadays, due to the transition towards a diet based on softer food, more pronounced bite positions and overbites have developed, which can also be seen in older adults. In light of this fact, Alt et al. [1] see this as the cause for tooth crowding and malpositions in our time.

Due to the permanent ability of teeth to erupt and migrate in the mesial direction, tooth hard substance loss in the vertical dimension was compensated for in Aboriginal people. Also, the alveolar bone grew together with the eruption of the teeth throughout life. Thus, Begg assumed that “as occlusal attrition occurs, occlusal contact of all teeth is maintained, without reduction in the interalveolar distance, by the hereditary process of continual tooth eruption” [2]. This fact means: if the wear of the hard tooth substance is continuous and slow, the vertical dimension of occlusion remains to a great extent identical throughout life.

The adjustment of the bite position and masticatory plane is related to the interplay between the eruption tendency of the teeth and the activity of the masticatory muscles [3] (Fig. 6). To illustrate this, when de­glutition occurs unconsciously about 1000 to 2000 times during the day, the adductor muscles of mastication briefly pull the lower jaw in the retruded contact position of occlusion; this short impulse of tooth contact is registered by the various periodontal receptors. Furthermore, during de­glutition, receptors (Ruffini endings, Pacini corpuscles, Golgi tendon organs, free nerve endings) register the position of the temporomandibular joint, the muscles as well as the surrounding soft tissue of the stomato­gnathic system. It is likely that via these receptors, comparisons in the centers of the somatosensory system take place, which analyze the position of teeth, masticatory plane, musculature, and joint. Depending on the analysis of the receptor impulses, instructions are then provided by the motor cortex to the basal ganglia and the red nucleus; for example, this may involve coordinating the muscles to bring about the resting position, or in the case of “distur­bances” such as a raised bite position, it may involve triggering muscle activity to eliminate the disturbing contact (Fig. 6).

Based on the observations of Begg [2] and other dental anthropologists [1, 10], “wear” of the tooth structure must be considered as a natural and, to a certain extent, necessary phenomenon. All of the components of the stomatognathic system can adapt through growth and resorption processes; this includes bones, periodontium, mus­cles, and soft tissues. It is just our teeth which are formed once and which are not adaptive; during their period of use, they can only “wear”. Structures such as bones, muscles and the peri­odontium react to this fact. The tooth serves as the fixed element, while the other structures serve as the flexible elements in the stomatognathic system. In this context, the current concepts for the reconstruction of a dentition that has undergone erosion must be critically considered. To begin with, many of our modern materials are much more wear-resistant than enamel. This applies especially to monolithic zirconia dioxide [4]. Reconstruction of the occlusion should not prevent the natural wear of a dentition with age. Given that wear of the tooth hard substance has slowly taken place over the years, it must be assumed that adaptive processes have largely maintained the vertical dimension of occlusion.

Abrupt increases of the bite position are to be avoided in these cases. General statements such as “5 mm bite elevations always work” are certainly not correct. From splint therapy, it is known that bite elevations can be adjusted [7, 9]. Following elevation of the bite, a floating resting position should still be present; moreover, the elevation should be planned in the centric relation of the lower jaw relative to the upper jaw in order that the increase takes place as near as possible to the pure rotational movement of the lower jaw. According to our clinical observations, reconstructions with bite elevations fail in particular when they were not made in the retruded position, but rather shifted in a sagittal direction towards an anterior position.

Whoever faces the challenge of “elevating the bite position” should thoroughly study the etiology that led to the loss of hard tooth substance in patients. The new bite position should be tested in centric relation with an occlusal bite block [3] (Fig. 7). The classical Michigan splint is the method of choice, and if necessary, bite elevation should be performed in several steps. By using a well-polished occlusal splint, worn especially during the day, but excepting mealtimes, parafunctional occlusal wear patterns can be easily iden­tified. In cases where clear tooth wear patterns exist, elevation of the bite position is risky. This is because the wear patterns are indicative of the fact that the patient has not adapted the new bite position thus far; the selected bite position has led to (renewed) parafunctions, which can later lead to damage such as chipping of the veneering ceramic. 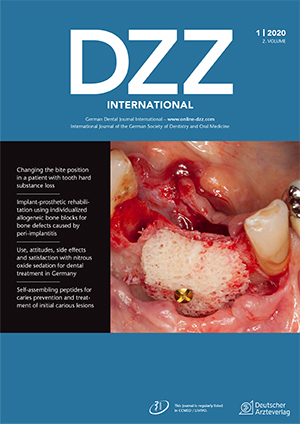